We’ve recently been contacted by former Club member Donald Erickson, who is now 91 and living in Canberra.

The Erickson family have a long connection with the Club, dating back to our very early years.

Don went on to win the George Wheaton BBB Memorial Trophy in 1944-45 and his name is still on it!

Photo of the 1911 Water Polo Team with Erickson family members.

On Tuesday, 15 November 2016, Five Dock Library will be hosting an evening for past and present members of Drummoyne Swimming Club to share their memories and stories of the club.

The stories will be recorded and added to the library’s oral history collection.

All past and present members and friends of the Club are welcome to join us at Five Dock Library from 6pm to 8pm. 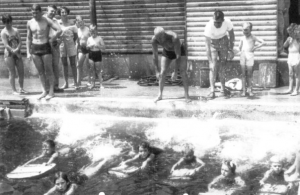 Some interesting facts and information on the history of Drummoyne Swimming Club have been published here.

A big thanks to our Club Historian, John Towns (Hon Treasurer 1997-2002) who painstakingly researched and compiled this material.